Category Archives: 3-2 Sri in the Land of the Pyramids

Sri in the Land of the Pyramids

“Oprah, she is my inspiration.”

Many a westerner’s adrenal glands would explode if they saw their baby crawling on the ground in a busy Indonesian bird market.  They would push, tumble and dive to save the little one as it moved with purpose  toward four giant rooster cages, little fingers reaching for the thin bamboo bars.  But Sri, the baby’s mother, watched nonchalantly as she stood by the door of the public toilet waiting for customers.  The baby picked at a cage while the mammoth rooster  nervously danced as far from the little human as the bars would allow.   The baby said ‘ack’ (in bahasa Indonesia, of course) and crawled to Sri who picked her up and bundled her in a batik sling.  A man approached, smiled at Sri as he dropped a 1,000 rupiah note in the change box and went inside to pee.

Franklin Delano Roosevelt contracted polio, it is theorized, because his spotless boyhood environment did not allow his body to develop antibodies.   Welcome to the floor of the bird market – no babies in white frocks going to doll parades here.  The babies, like most Indonesians live, for good or bad, very close to the earth.  There are no weed-free lawns or ipe’ decks.  Hell, there are almost no sidewalks – even in Jakarta.  For many,  the rice field is your day and a bamboo hut is your night.  Maybe you can raise some birds at home and afford a motorbike (on credit).

Aris, Sri’s husband, has birds and a motorbike.  He also owns a toilet business at the Muntilan Pasar Burung  (‘Bird Market’.) The family takes in about 45,000 rupiahs a day.  If that sounds like a lot – it isn’t.  Coming in at just under $5 twice a week (minus rent), it is a very meager income.  So meager that Sri (who speaks six languages including English and Japanese) told me that in one month she will leave Aris and their three kids to work as domestic help in Egypt for two years. The pay, $9,000 a year for back breaking 7-day-a-week work.

“I have been strengthening my heart,” she said.  “I won’t tell the children.  I’ll just go.  My mother and father will look after the kids.”  Well, my heart went weak when I heard the news.  We had been spending several days with Sri and Aris at their bamboo house in the woods.  Aris had once been a political operative for the Indonesian communist party, PRD (Partai Rakyat Demokrat), but had lost his position in a power struggle and found himself and his family out on the street.  Sri moved the family back to her parents’ house in a little village near the Menoreh mountains, close to Borobudur.  We met them at a bekisar rooster competition – a low-income cousin to the perkutut world. 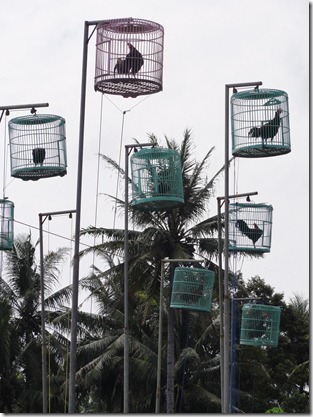 The first day we headed out to Sri’s and Aris’s  house on our own, we didn’t remember where Aris had taken us.  The ojeks (motorbike taxis) didn’t know the little village and eventually we found an old driver of a house and buggy who took us the 6 kilometers to the village.  The town people stared curiously as the white guy and the “Malaysian tourist” (as some had started dubbing Kian) pulled into the narrow lane.  Piles of dried rice stalks were being burned to keep bugs away.  We hopped down as the black smoke swirled around us and made for the house.

Kian learned from Aris that he had worked for Prabowo Subianto, the alleged mastermind of the massacre of thousands of Chinese Indonesians in 1998.  Kian, who was granted asylum in the US because of the slaughter, looked disturbed.  “It isn’t true,” said Aris. “This was used to slander his name.”  I didn’t know at the time what was being said and I proposed a change of scenario.  Aris said he needed to catch bugs for the roosters and lead us down steep clay steps to the rice fields.  He whipped a net quickly through the stalks aiming at unsuspecting crickets.

Agil followed his father over narrow clay walkways above the waterlogged paddies.  The three-year-old stepped down into the water.  Aris chuckled and hauled Agil out, his feet now covered in gray mud.   “There used to be snakes and frogs here until they started using pesticides and depriving them of food,” Aris had told Kian. “I go to the non-pesticide area.”  He whooshed the net again and the two ambled off to a little watering hole where they bathed.  All I could think of was the pesticides and the grey water runoff of a thousand bamboo huts on the hills around us.  “Fresh, natural,”Aris said as he hauled a naked Agil on his back and we headed home.

It was the next day that we went to the bird market and found out from Sri that she was leaving.  “I asked Aris and he said it was okay.”

I asked, “What are you doing to prepare yourself emotionally?”

“I think of Oprah. She is my inspiration.”

“Sure, why not?  Why not let her know how she has touched you. Maybe nothing will come of it, but why not?”

Then it dawned on me that this was a bad idea.  What sort of false hope am I delivering here?  Well, it is already out there…

Sri looked at me and said, “Oprah has been an inspiration to me and I’d like to say to her…”

I interrupted her.  “Sri, look right in the camera and speak directly to Oprah.”  (Jim, what the fuck are you doing?  You fucking stupid American.)

Sri turned her head and looked deep into the lens.  The baby was now sleeping in the sling. She swallowed hard and began,  “Oprah, I just want to tell you have been an inspiration for me…”  She stopped, her eyes growing with tears.  “I can’t, no, please.  Not into the camera.”  Sri stepped out of firing range and checked the change box.

I might have been delivering false hope, but in Sri I had met a realist.  The next day we came back to the woods delivered on motorcycle by Ari, a worker we had met at our bamboo hut-style hotel (bucolic except for the mold everywhere).  We talked to Sri’s father who worked for 17 years sweeping the floor of a factory until he was laid off in the economic meltdown.  He became one of those hopeless old guys you see sitting in becaks (pedicabs) waiting for a fare.  He came back to his home in the woods and at 83 still works the rice field everyday.  “If I don’t,” he said. “We won’t have enough to eat.”

The kids loved having the camera around and we watched as they played naked around a street vendor with beef ball soup who had stopped for a rest.  (The vendor carries two large boxes on both sides of a large bamboo pole that he balances on over one shoulder, one box in front and one in back.)

Aris had been sick and he sat on the foam couch.  “What do you think about Sri leaving?” we asked him.   “Sri is like a butterfly,” he answered. “Now it is time for the butterfly to leave.”  Sri sat at the other end of the couch looking at the floor.  I can only imagine Aris was masking his own pain – saving face is very important in Javanese culture.“Mr. Jim,” Aris said.  “Do you have children?”  I answered no.  “Oh, you must have children.  Without children there is only loneliness.”

It was getting dark and we called for the motorbikes to pick us up.  As we waited for them to arrive Sri called to the kids, “C’mon while the camera is still here, say hello to Oprah.”

Ari and his friend Amin arrived and balancing tripod, camera and sound bags we made our way back to the Podak Tongal hotel on the road to Borobudur.

Filed under 3-2 Sri in the Land of the Pyramids