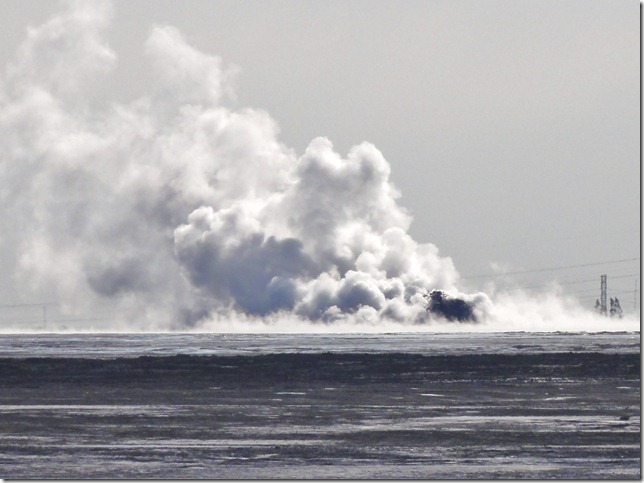 If you want a glimpse of the apocalypse visit the Lapindo mud volcano in Sidoarjo south of Indonesia’s second largest city, Surabaya.  BP could have learned about unplugged holes from the Lapindo Oil Company which is solely responsible for one of the archipelago’s biggest environmental disasters.

In 2006 engineers from Lapindo drilled for oil in a plateau bordering the volcanic Mount Penanggungan.  They drilled and drilled and found no oil.  But they did not plug the holes back up.  Soon after, the ground collapsed around one of the drilling sites and out of the massive crater bubbled volcanic mud.  The mud graduated from bubble to eruption as tons upon tons of boiling liquid earth exploded from inside the ground.  The muddy porridge soon filled the crater and began advancing on nearby villages.  Villagers were given two days to evacuate, though many, reading the Earth’s signs, had left already.  New craters started forming, swallowing houses and releasing sulfuric gas. 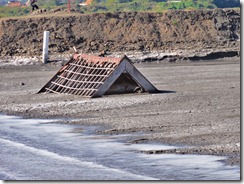 The government started building an emergency dyke around the mud flow.  Earth movers worked day and night and soon a towering ring wall encased the mud.  Everyone breathed a sigh of relief.

But the mud soon filled the giant bowl formed by the dyke and like a poison chocolate pudding the mud flowed over the steep walls.  The first village fell and then the next.  A new dyke was quickly constructed.  It failed.  Another concentric ring was built enclosing several more villages.  The mud kept advancing, rolling over every new dyke.  Eight rings would be built over the next four years, holding in a 21 meter high sea of hot mud that covers 12,000 hectares.   In all, 16 villages would be consumed.

And the mud keeps coming.

Our host, Pak Nur, was once a contractor at the site and drove us to have a look.  The original toll highway had been buried under the mud and one now approaches on a congested dirt highway.  We parked along the road and a man offered to be our “car guard”.  We stepped carefully through a muddy path and across wooden planks and the railroad tracks, which had collapsed and had been rebuilt.   Pak Nur warned that under the road stores of natural gas gathered and there was a risk of explosion at any time. 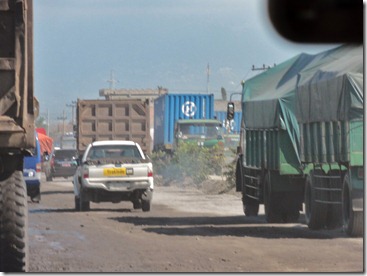 Several men wearing bandanas over their faces (I presume for the dust, but it did make them look intimidating) stopped us to collect a fee to ascend the stairs of the dyke.  Nur said that they were former villagers trying to make some money from visitors to the site.  Fair enough, I thought.  We paid and started up the 21-meter high dyke.

Sulfur fumes and dust circulate at the edge of the lake.  In the distance a giant plume of smoke masks the bubbling mud.  Though this has been going on for years, there is a feeling of urgency to the site.  Heavy machinery moves up and down the dyke road, and between the wind, noise, dust and village refugees it is a very unsettling place. Pak Nur found us someone to take us around the dyke on motorbikes.  Pak Romly had been hawking DVDs of the disaster and said he had lived in a village, “about there…” he said as he indicated the middle of the mud lake. 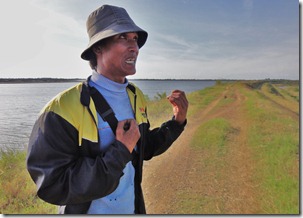 I got on Pak Romley’s bike and Pak Nur and Kian shared another bike as we started our tour around the mud.  The tops of large factory buildings were still visible and as we turned a corner we saw a field of white walls standing like gravestones. 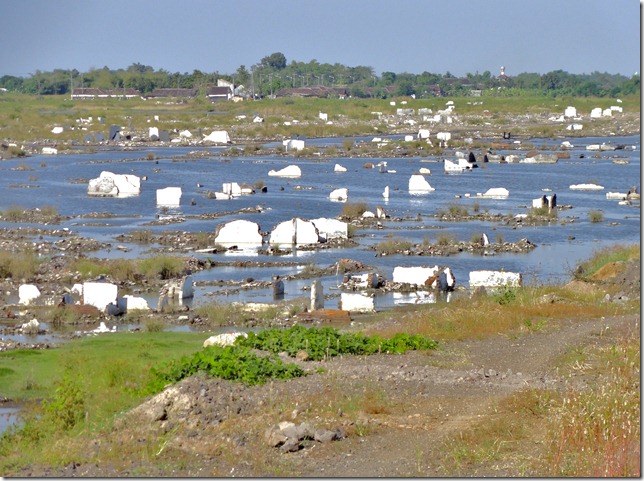 Pak Romly explained that villagers had demolished their own houses, carting away roof tiles and wall blocks to hopefully rebuild somewhere else.  This site was just on the outside of the dyke, but it seemed only a matter of time before the mud would cover it.  Compensation, Pak Romly explained, was based on having a “certified” house.  After four years “certified” owners (likely the minority) have gotten only 20% compensation.  Others, without the certification, get nothing. 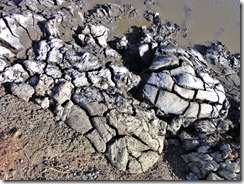 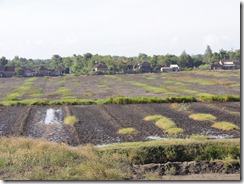 In a temporary (possibly permanent) solution, the mud is now mixed with water and pumped into the nearby river, which flows to the sea.  Refugee camps surround the dyke and people reportedly have been sticking pipes into the ground to retrieve gas for cooking.  They light the gas coming out of the pipe and there have been several explosions from the practice.

I managed to hold the video camera high above my head as we cruised around on the motorbike to get the panorama.  We approached a gate and Pak Romley crawled under, a security guard drove up and said we couldn’t go to the place where the mud was bubbling because it was too late in the day.  (Apparently it is no problem earlier. This would be totally off-limits in the US.) 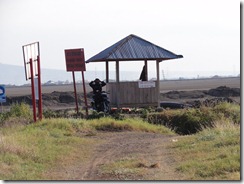 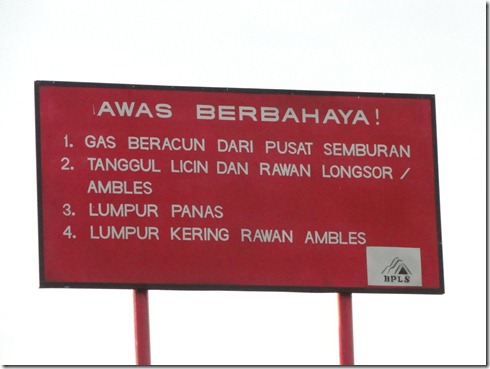 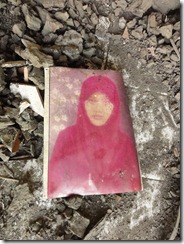 (Pak Nur surveys the mud filled street of a doomed village.  Five mosques had closed because of loss of congregations or had been completely lost to the mud.)

As we made our way to the pumping station we were told that the pumps had broken.  A small amount of mud water pumped out, but not nearly enough to accommodate the volume coming out we saw at the site. 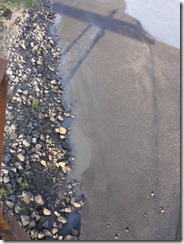 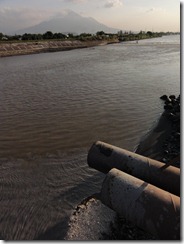 After several hours touring the site we were tired, feeling a  little queasy from the smell and just completely ready to leave.  We paid Pak Romley and headed off to visit the owners of the nearby Prisma Bird Farm, which I will cover in a subsequent post.

Filed under 3-4 The Earth Bleeds Mud