Lunch with the Prince 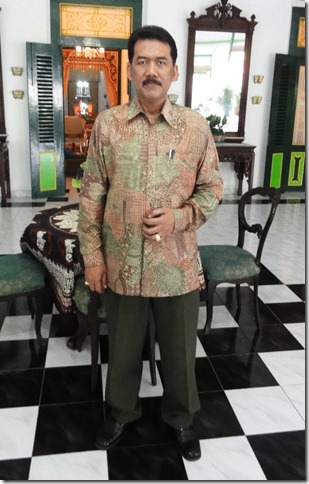 I was determined to get the full name of the prince right.  We were do to meet him at the palace in Jogja for lunch and I was preparing, “Pak Prabukusumo, saya senang jumpa”  (I am pleased to meet you.)

The prince had been a former perkutut competitor and we wanted his outlook on the sport.  He’s also a busy man – head of a regional political party and heavily involved in Muhammadiyah, a moderate Muslim organization that would start its 100 year anniversary in Jogja the next day.

Kian groaned.   “Just call him Pak Prabu.   Otherwise, you are going to get it wrong.”

Before the trip Kian had called the palace who connected him to the prince’s house and staff there gave Kian the prince’s cell number.  They had chatted several times and he seemed quite affable.

“The prince is likely to be refined, right?”  Kian gave me a “duh” look.

I wondered if he would have  a sense of humor if I got his name wrong.  Okay, mnemonics.  “Pra” is like “Prada”, “Bu” think of ghosts in the palace.  “Ku”  the soft coo of the doves and finish it off with Japanese wrestlers.  Right, truth telling ghosts who make doves sing as they watch two big guys pull at each others’ underwear. Got it.

“Pradabukusumo”  Wait I don’t think there is a ‘d’.  “Prabu, right, Prabu.  There is a good prabubility I am going to screw it up.

Kian had been commenting that Indonesians always want to meet white people.  It seemed true.  At the Prambanan and Borobudur temples people would ask to take a picture with me.  Passing little kids in the street they often reach out to touch my arm.  Kian kept saying that my being white helps to open doors.  The general, for example,  had referred to us as “James and some Indonesian guy.”

We put on some nice batik shirts and got a taksi to the palace.  The complex is huge, taking many acres of the center of Jogjakarta and wrapping itself around old colonial fortress walls, giant magical Beringin trees with their masses of viney air roots and the palace village which in its meandering alleyways houses over 25,000 people.  We found the prince’s door and rang the bell.  A woman with shopping was walking toward us and unlatched the door to let us in.

We stepped inside and stood next to two black Mercedes parked next to a grand veranda enclosed in tall white-washed walls.  The prince stood at the back talking to a gardener and came to greet us.  We started to reach to take off our shoes and he waved at us.  “Really, no need,”  he said. “Welcome, please come in.”

“Terima kasih Prince,” I said.  I hadn’t gotten my phrase out, but I was prepared to use his full name at some point in our meeting.  We stepped up to the veranda with its expanses of white tile interrupted by little clusters of Victorian furniture.   I could see a strong resemblance between the prince and pictures of his father, the sultan who had sided with Sukarno during the fight for independence and earned Jogja “special territory” status.  Sri Sultan Hamengkubuwono IX had died in 1988 on a trip to Boston.  George Bush senior had his body flown back on Air Force Two.

We sat and chatted for several minutes and then the prince said, “Come, let’s go to the palace restaurant.”

The prince’s driver held the door of the Mercedes open for me and I sat in the back with the prince.   “So, Pak Pra-Bu-Ku-Su-Mo,” my intent to make small talk so I could slip in his name.

“That’s right, Prabukusumo.  I am very involved in politics but my favorite is philanthropy.  I really enjoy this.”  We drove a short distance down some narrow alleys and arrived at an outdoor restaurant.

“Here are all the favorite dishes of my father and the sultans before him.”

A table of businessmen stood quickly when they saw the prince.  He put his hands together and bowed gently to them as we were lead to our table.

“My favorite is the beef tongue.  Would you like to order it?”

“Ah, prince, I don’t know if I am ready for beef tongue.”

“James please you must try the beef tongue.  Take one piece from my plate.”

Hmmm…I thought.  Guess I shouldn’t turn it down.  I took the plate from him and cut off just a little piece.  The prince gave me a quizzical look as I handed the plate back to him and now I wonder if I had passed it back with my left hand – a big no-no.  That’s the toilet hand.

The beef tongue was delicious.  It just tasted like incredibly tender beef.  Javanese ginger beer to wash it down, two kinds were brought, one chilled and one hot.  The hot one was a deep ruby red.

“Drink half of it and then squeeze in lime and it will turn the color of the other drink.  I ordered this for you.”

He sat trying  to think of an ingredient in the drink.  He got up and a waitress returned with a stick of fresh cinnamon, still moist after picking.

We lunched on kassava medallions, marinated tempeh, beef ball soup with coconut and chicken with mixed peppers and tomatoes.  The rice was a blend of white and a special red rice from the region served with sauteed papaya leaves and a nut cracker.

On the ride back to his house I tried to talk politics.  “ I read that the NU and Muhammadiya are rejecting calls for Sharia law in parts of the country.”  The prince gently rebuffed me, changing the subject.

“Yes, yes.  The palace was built in the 1750’s and my brother the sultan still lives here of course.”  Must be the tidbits of information he gave to all his visitors.

We arrived back at the house and set up for an interview.  As I gave him the wireless mike I said, “Prince Pruba…”

We interviewed him for about an hour.  I said that a lot of Americans would be questioning the humanity of keeping birds in cages.  Without the sport, he countered, these birds would not exist.  “Should we release them into the wild?  They will be hunted or die in the jungle.  These birds are bred, they cannot survive on their own.  The sport creates many needed jobs too.”

The prince obviously loves the birds.  When he bathes them he sometimes holds the bird’s beak in his lips and kisses it.  He knows all the doves by the sound of the singing voice.

After the interview we got a tour of the house.  It is actually a series of houses separated by gardens full of tropical flowers, fruit trees and a full grown iguana.  In the last garden were the perkutut cages.  We went into a room loaded with trophies and evidently his wife’s overflow closet.

“So many trophies, what do I do with them?” the prince lamented.

Kian shot me a glance.

In the main house we looked on the wall of family portraits including Pak Prabu’s father, the sultan.  The prince explained that when his father died and Bush sent Air Force 2 with his body to Indonesia that Suharto, not wanting to be  upstaged by the Americans, sent a plane to Hawaii to intercept and take the body from there.  “This is something, right?”

The prince also wondered about Paul Wolfowitz.  Wolfowitz was ambassador to Indonesia for many years and is still revered here.  “He knew we were against the invasion of Iraq.  How could he support it?  I just don’t understand.”

After pictures and a warm handshake we said our goodbyes and the prince had our driver take us back to the hotel in the big black Mercedes.

Filed under 3-1 Lunch with the Prince